Frost as we all know forms due to change in temperature from high to low. But this isn’t the only reason why frost forms, due is another factor. Due forms because of the air being cooled down rapidly which produces condensation on the glass. When the temperature drops below water’s freezing point and because glass isn’t able to retain the heat from the water droplets, frost forms. You can prevent this from happening by spraying your windows with rubbing alcohol or vinegar. 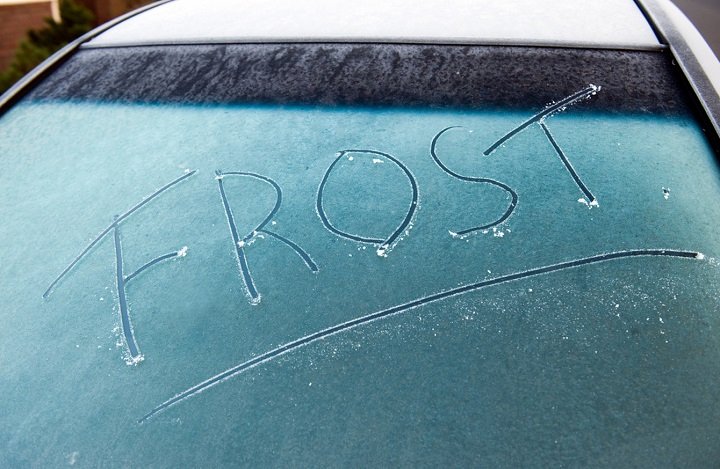 Some people even recommend rubbing a raw onion but this is not really proven to work. You can cover your windshield to prevent frost from forming but the side windows will need to be sprayed with vinegar/ rubbing alcohol. If you forget to do that or if this is after the fact we are talking about, you are going to need a different approach in order to remove frost.

How To Get Rid of Frost

The most convenient DIY auto repair, in this case, would be to use a de-icer, either commercial or one you’ve made on your own. This product can be found at gas stations, in supermarkets and filling stations too. To clean frost off car windows with a DIY de-icer you’ll need some rubbing alcohol and a couple of drops of dish soap. Put these two ingredients into a spray bottle and shake it to mix them together.

1. Spray the de-icer on the windows and let it soak for a moment. A minute or two will be enough for the solution to start doing its thing. After that, get a plastic scraper and scrape away the frost. If necessary you can spray the solution one more time in order to remove stubborn spots when scraping afterwards.

1. For this car fix, you’ll need either a bag of rice or what are known as sodium-acetate hand-warmers. Fill a heavy-duty zip-lock bag with rice and microwave it anywhere from 30 seconds up to a minute. You might need to make more than one bag depending on how difficult it’ll be getting rid of the frost with the first bag.

2. Slide the bag of rice back and forth across the inside of the windows – focus on one window at a time. The bag will warm up the glass which will cause the frost to melt. You need to hold the bag until you can see the frost melting a little bit and then continue to the following spot. Sliding the rice bag across the window needs to be done quickly as holding the bag for too long can stress the glass and may cause it to crack. Sodium-acetate hand-warmers work in a similar fashion as a rice bag but they can be used at a later time too as all you need is a quick click in order to activate the heat reaction. Sodium-acetate hand-warmers can stay in your car as they are ready to be used at any time.

3. This method is better than scraping as the glass cannot re-frost since heat is used to get rid of the frost in the first place. You’re also removing the frost from the inside of your car rather than outside in the cold.

1. A quick and easy way to clean frost off car windows is by using a credit card or anything similar to it. This should be used as a last-resort option when you don’t have time to prepare bags of rice, a de-icer or have a regular scraping tool at hand.

2. Turn the heating on at the highest setting and make sure you have your car running. Get your card, make sure it is not laminated and not important too as you can damage your card when scraping off the frost. With the heating and the car running, go outside and start scraping the frost from the window. Do this by holding the edge of the card at an angle against the window and just push down firmly. Keep the card as straight as you can, do not allow it do bend or flex as this can cause it to break or deform.

3. This may require a lot of effort depending on the frost and the temperature outside. A credit card is not as sharp as a scraper tool so it may take a while, don’t give up, be persistent and if needed push a bit harder when scraping. If you think that your card may not be able to hold up the force being applied to it you can use multiple cards.

4. Stack up two or three cards and scrape the windows holding all of them. To make things easier you can use your windshield wipers and fluid. Do this periodically for a couple of seconds to assist in removing the frost off the windshield but to also get rid of ice shavings that may have accumulated at the edges of the window. The fluid and wipers can help soften up the frost but you should use them after you’ve used the credit card(s) otherwise the frost can damage the blades of the wipers.