Have you been in a stalled car situation like this? You have helped in jumpstarting another car. You let it run for 20 minutes to make sure the battery has been sufficiently recharged.

Contents hide
1 Be a helpful motorist, with caution
2 Call trusted people before jumpstarting on the road
3 Check battery condition before jumpstarting a car
4 Same battery make or better
5 Always be loaded with jumpstart cables
6 Other reasons other than a battery that car won’t start
7 Necessities that you should have to perform a jump start on a car
8 How to perform the Jump-start process, putting on the clamps
9 When successful, recharge with a smart battery charger
10 Ideal charging time for a dead battery
11 Your battery is not immortal
12 Battery load-tested regularly
13 More tips for longer battery life
13.1 About Post Author

If the charge holds, the battery and the car will be fine, until the fellow goes home, at least. If not, it would be a long story. It’s either it’s time to buy a new one or to have it recharged.

We devote a lot of time to our car! Most of us spend a considerable time on the road, whether traveling, just having a therapeutic drive, going to work, or to do errands. Because our vehicle is our responsibility in terms of its care and maintenance, it can’t be helped sometimes that emergencies do happen.

It will happen not only to us but to others on the road. And what happens when you are right there and somebody needs your help? One scenario that could happen is if a fellow motorist’s car won’t start!

Be a helpful motorist, with caution

Jumpstarting another person’s car is a Good Samaritan and a Good Neighbor way of helping others in distress on the road. But be cautioned about some technicalities which might burden or give some mechanical or electrical problems to your own vehicle doing the Jumpstarting.

If the distressed person will refuse your help, don’t get offended. He might have had a bad experience with strangers before when asking for help. Put yourself in his shoes. You wouldn’t also want to accept help from anyone you don’t feel comfortable with.

Call trusted people before jumpstarting on the road

If in case he did really accept your assistance, let him call first a trusted person to inform about what’s happening at the moment. As for your own protection, you should also call someone about your whereabouts because jumpstarting somebody’s car might take several minutes or hours to complete.

People might be expecting you home at a certain time, and if you can’t arrive promptly, they don’t need to worry.

First things first. For your own battery’s sake, check the condition of the battery being jumpstarted. Is it frozen? Is it cracked or leaking? Is the battery very dry? Have the fellow check the individual cells for fluid levels and let him add water accordingly.

If there is evidence of corrosion with white or green powdery material on the battery, let the guy clean it off with aluminum foil, wire brush, or anything (except hands) because the chemicals are damaging to the skin. It’s best for both of you to cover your mouth and nose with masks because dealing with this stuff is lung irritants.

You see, we haven’t even started with jumpstarting the battery yet, but we have to take precautions because matters might get worst if we start on the wrong foot. A leaking, dry or frozen battery is bad news. If these are the symptoms, it’s better for the distressed motorist to have his car towed to the nearest point where he could ask for help. If it’s nighttime, do everything the next morning.

It would help a lot if your automobile and the car you’re helping are of the same make and battery specifications. It would even be best if your battery has more voltage than the battery you’re jumpstarting.

Never be abrupt in thinking quickly even though your car is a sedan and the car you’re jumpstarting is a Sports Utility Vehicle because definitely, the battery of the SUV would be stronger. Take the time to go home and get an equal powered or more car to help in the Jumpstarting.

Or contact more friends and colleagues who could help with the situation, with their more powerful cars with bigger voltage batteries.

Always be loaded with jumpstart cables

For your own sake, always equip your own car with Jumpstart cables at the back because these accessories are not always available on the road. You’ll never know when you’ll need them too, or another poor chap whose car broke down on the road.

If it holds for that long, then the owner of the car won’t have to worry that he’ll be able to reach home without the battery acting up again until he reaches home. When letting go of the Jumpstart cables, release them in the reverse way that you placed them on the battery.

If it’s still daylight and still within business hours, it would be best that the car with the battery problem consult with the nearest battery store as soon as possible on whether he needs a new replacement battery. And while he’s traveling, he shouldn’t stop the engine of his car or he would have a problem starting it again until help comes.

When you’re in the unfortunate situation wherein the car being Jumpstarted can’t be able to hold the engine for more than 20 minutes, then something is wrong. If the battery has been used for three to five years or more, it might be time to buy a new one.

After idling, advise the chap to keep his engine RPM up so that the alternator will charge the battery at a faster rate. If he will be driving on the highway, his car would be charged considerably in 30 minutes. If he’s doing city driving, he needs an hour or more to be really sure his battery won’t abandon him on the road.

Other reasons other than a battery that car won’t start

But wait, there might be other reasons if he will have trouble starting the car. Don’t blame the battery all the time.

2. Electrical items which are left operating overnight in your car such as interior lights or the radio still turned on for several hours. Or your rear storage compartment not closed compactly leaving the light in it still on overnight.

3. Poor connection between the alternator and the battery such as loose wires or damaged wires.

This is for car breakdowns and other unexpected emergencies, including when the vehicle won’t start. Have the following things always ready and available in a storage area of your vehicle:

How to perform the Jump-start process, putting on the clamps

It’s best that your clamps should have metal teeth that grip well the terminal post. Then place the other end of the red positive clamp to the red positive terminal post of the working battery. Likewise, put the black negative clamp to the negative terminal of the live working battery and attach the other end to a non-painted metal surface on the main engine block of the car being jumpstarted.

One good non-painted metal surface is either a metal bolt or nut that is far away from the battery so as to have solid grounding. Once all the connections are sure to be secured and well clamped, start the car with a good battery. If it won’t start, try again every few minutes until you’re successful. A very weak battery will not let your car start, even though, every now and then, it will give a semblance of hope.

But don’t force it after trying a couple of times. The weak battery will strain your starter motor because it will require a higher current for the starter motor to compensate. The worst that could happen is that the car won’t stop, you have a dead battery, and the starter motor is also damaged, if you force it so much. Whether successful or not, unhook the clamps in reverse order.

When successful, recharge with a smart battery charger

If you have one, after a successful jump-start, recharge the battery with a smart battery charger.

What are its benefits? It protects the battery from overcharge which could damage it. In maintenance mode, it could fully charge automatically your battery. It also has deep cycle modes to revive your completely dead battery.

Revving up the battery or simply driving it for a couple of miles are just temporary solutions to reviving a dead battery. If the battery still has life in it, it’s best to turn it into the battery shop for full recharging. A fully dead car battery takes 4 to 24 hours to reach full charge.

Modern AGM batteries can be charged faster than traditional batteries that are filled with distilled water. They charge at 10 amps or more, so you need only a charging time of 5 hours. So it is recommended to use an advanced automatic charger to take out the guesswork and to prevent the overcharging of your battery.

Your battery is not immortal

No matter what you do, if it is over 3 to 5 years old, you definitely have to replace your battery. For one, if it’s leaking, it’s dangerous to you and to others who are around the battery.

It should hold a charge. When your engine is running, the battery should show a healthy 14 volts. This indicates that the alternator is giving enough power to recharge your battery.

With regards to your alternator, to give it the best chance to charge the battery, turn off anything that’s competing with the energy of the battery. Any unnecessary electrical items that are not needed at the moment like the radio, the air conditioning, the interior and exterior lights, and more. Also, check the condition of the alternator belt. Regularly clean the battery terminals and cables because corrosion on them will prevent the sufficient charging of the battery.

If you drive the car on a regular basis, it’s good for your battery because it will be recharged every time you start and drive the car. But if your usage of the car is suspended for long periods, better to disconnect the battery. Non-usage will drain the battery over time. Purchase a reliable smart charger. Your battery will always be optimally charged and will switch automatically when it’s fully charged. They also rehabilitate batteries that have been left for dead.

If you have a smart charger, battery issues while on the road, will not be an issue for you. 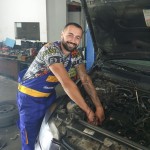 Hi there, welcome to DIY Auto Service and thanks for visiting! My name is Jane, the guy behind this site. I am an owner of a mechanic shop and aftermarket part store at the same time.

The main reason I decided to create this blog is to share all my acquired knowledge about cars. You can find everything from car repairs, car maintenance, tips and tricks, non bias product reviews, and comprehensive buyer guides.

Hope you find all the information helpful.
So please enjoy your stay and start scrolling down to explore!